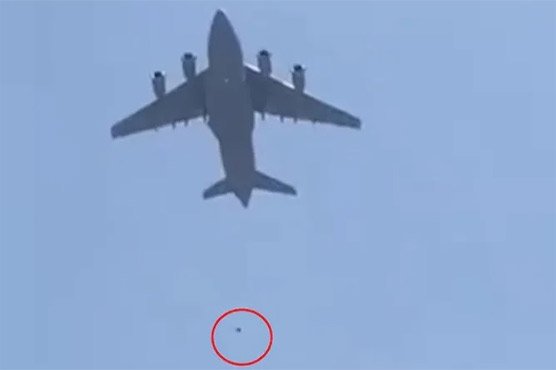 KABUL (PEN) – Three were killed when people hanging from a US Air Force plane fell to the ground during the flight in an attempt to flee Kabul. In another incident, five Afghan civilians were killed as US troops fired aerial shots at Kabul airport.

According to a foreign news agency, the Afghans in an attempt to flee Kabul were hanging with a US military plane and fell to death mid-air during flight. The incident happened when the American plane reached a high altitude after taking off.

One witness said he had seen the bodies of five people being taken to a vehicle. Another witness said it was not clear whether the victims were killed by gunshots or in a stampede.

Dramatic footage posted on social media showed a scene of chaos on the runway, with civilians frantically clambering up an already overcrowded and buckling set of airstairs.

It was a desperate bid to board a parked passenger plane and escape the city a day after the government’s collapse.

As a crowd of hundreds watched on, those who successfully climbed the stairs helped others up, while some hung from the stair railings by their hands.

The situation caused such a commotion that US troops fired into the air to restore order and all commercial flights were cancelled.

“I feel very scared here. They are firing lots of shots into the air,” the witness said, asking not to be named in case it jeopardised his chances of leaving.

The US State Department said American troops had secured the perimeter of the airport as they evacuate embassy employees and thousands of Afghans who worked for Washington’s interests since they toppled the Taliban in the wake of the September 11 attacks.

The US embassy in Kabul tweeted to tell American nationals and Afghans to “not travel to the airport”.

But thousand more Afghans — even some with no links to the US-led coalition — showed up in the hope of getting out, even without tickets or visas for foreign destinations.

The bedlam at the airport came just hours after Taliban leaders ordered their fighters into Kabul to maintain order as Afghan President Ashraf Ghani fled the country.

“We are afraid to live in this city and we are trying to flee Kabul,” said a 25-year old man who also asked to be identified only as Ahmed.

Many of the arrivals were fuelled by rumours, or fake news spread on social media.

“I read on Facebook that Canada is accepting asylum from Afghanistan,” said Ahmed.

“Since I served in the army… there is danger. The Taliban would definitely target me.”

The US said it had evacuated its entire embassy staff to the airport, but they were being kept separate from those without permission to travel.

Other videos posted on social media also showed desperate scenes overnight of people fighting to cram into the back of a cargo plane.

Outside of the airport, an uneasy calm held over Kabul as armed Taliban insurgents patrolled the streets and set up checkpoints.

In a message posted to social media, Taliban co-founder Abdul Ghani Baradar called on his fighters to remain disciplined after taking control of the city.

“Now it’s time to test and prove, now we have to show that we can serve our nation and ensure security and comfort of life,” he said.

The scenes at the airport were reminiscent of the chaos that enveloped Washington’s earlier bungled escape from Vietnam in 1975, even as Washington swatted away the comparison.

“This is not Saigon,” US Secretary of State Antony Blinken told a broadcaster on Sunday.