Afghanistan: How many evacuations has each country done?

The International Security Assistance Force (ISAF) which operated in Afghanistan under a UN mandate had troops from 51 countries. At its height there were 130,000 soldiers deployed.

The US had the biggest military presence in Afghanistan so it’s unsurprising that it has carried out by far the greatest number of evacuations.

However, many other countries, from Ireland to Poland and Qatar have been involved in evacuating their citizens and Afghans who worked with ISAF or are considered at risk under Taliban rule.

These are are latest figures for evacuations, as collated by news agency Reuters on Sunday August 29.

The U.S. military will continue evacuating people from Kabul airport until Aug. 31 if needed, but will prioritize the removal of U.S. troops and military equipment on the last couple of days, the Pentagon has said.

Washington has evacuated 5,400 U.S. citizens since Aug. 14, according to the U.S. government.

There were still about 350 U.S. citizens in Afghanistan trying to leave the country, a State Department spokesman said. 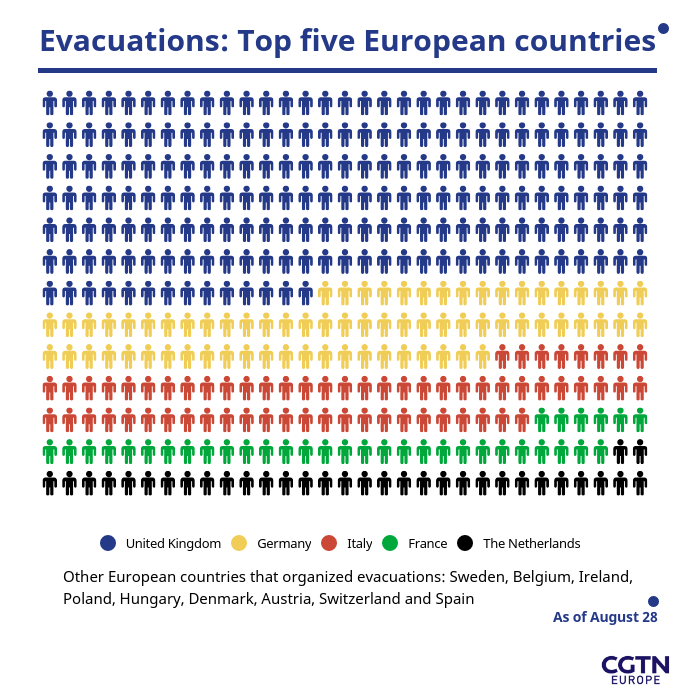 Britain’s last military flight left Kabul late on Saturday after evacuating more than 15,000 people in the two weeks since the Taliban took control of Afghanistan, the defense ministry said.

He said Canada had evacuated or facilitated the evacuation of about 3,700 Canadian and Afghan citizens.

Germany ended evacuation flights on Thursday. The German military has evacuated 5,347 people, including more than 4,100 Afghans.

Germany previously said it had identified 10,000 people who needed to be evacuated, including Afghan local staff, journalists and human rights activists. About 300 German citizens remain in Afghanistan, a spokesman for the foreign office in Berlin said on Friday. 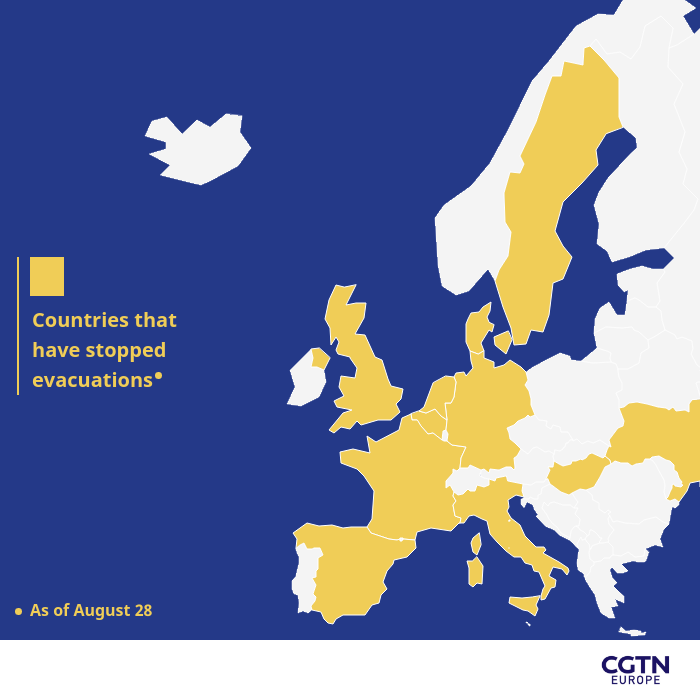 The French Defense Ministry said on Friday it had finished its evacuation effort from Afghanistan. During the operation, nearly 3,000 people, including more than 2,600 Afghans, had been brought to France.

Italy evacuated 5,011 people, including 4,890 Afghan nationals, among them 1,301 women and 1,453 children, a defense ministry statement said. The last evacuation flight left on Friday.

Sweden has ended its evacuation mission in Kabul, Swedish Foreign Minister Ann Linde said on Friday. She said that a total of 1,100 people had been evacuated, including all locally employed embassy staff and their families.

Prime Minister Alexander De Croo said on Thursday Belgium had ended its evacuation operations. Just over 1,400 people were evacuated, with the last flight arriving in the Pakistan capital of Islamabad on Wednesday night, he said.

Ireland’s foreign ministry said that it had evacuated 36 Irish citizens after the completion of an emergency consular mission on Thursday.

It said it was now aware of approximately 60 Irish citizens and family members plus a further 15 Afghan citizens with Irish residency who are still in the country and have requested assistance, far more than they had initially estimated.

Poland has evacuated about 900 people from Afghanistan, including about 300 women and 300 children, Prime Minister Mateusz Morawiecki said on Thursday.

Hungary has ended evacuations in Afghanistan after airlifting 540 people, including Hungarian citizens and Afghans and their families who worked for Hungarian forces previously, Defense Minister Tibor Benko said on Thursday.

Denmark made its last evacuation flight out of Kabul on Wednesday with the remaining diplomatic staff and military personnel, according to its defense ministry.

Denmark has airlifted about 1,000 people from Afghanistan since Aug. 14, including diplomatic staff, their families, former interpreters, Danish citizens as well as people from allied countries, the ministry said.

Ukraine has evacuated of all of its citizens who wanted to leave, the president’s chief of staff said on Saturday.

In all, it has flown out more than 600 people including foreign journalists, rights activists, women and children, Andriy Yermak said.

Austria is not operating its own flights and is relying on Germany and other countries to help with its evacuation. Foreign Minister Alexander Schallenberg told national broadcaster ORF on Wednesday 89 people with Austrian citizenship or residency had been airlifted out, while another two to three dozen people were still in Afghanistan.

Switzerland, which is relying on Germany and the United States to help with its evacuation efforts via Tashkent, has got 292 people out of Afghanistan, Foreign Minister Ignazio Cassis said on Tuesday. There were still 15 Swiss citizens in Afghanistan, but no more Swiss evacuation flights were planned.

The Dutch government said on Thursday it had evacuated 2,500 people from Afghanistan since Aug. 15, with about 1,600 of them brought to the Netherlands. The Dutch ambassador left on the final flight on Thursday. The Dutch have no diplomatic presence left in the country.

Spain has concluded its evacuation of personnel from Afghanistan, the government said.

Two military planes carrying the last 81 Spaniards out of Kabul arrived in Dubai early on Friday, a government statement said. The planes were also carrying four Portuguese soldiers and 83 Afghans who had worked with NATO countries.

Over the course of its rescue mission Spain evacuated 1,898 Afghans who had worked with Western countries, the United Nations or the European Union. 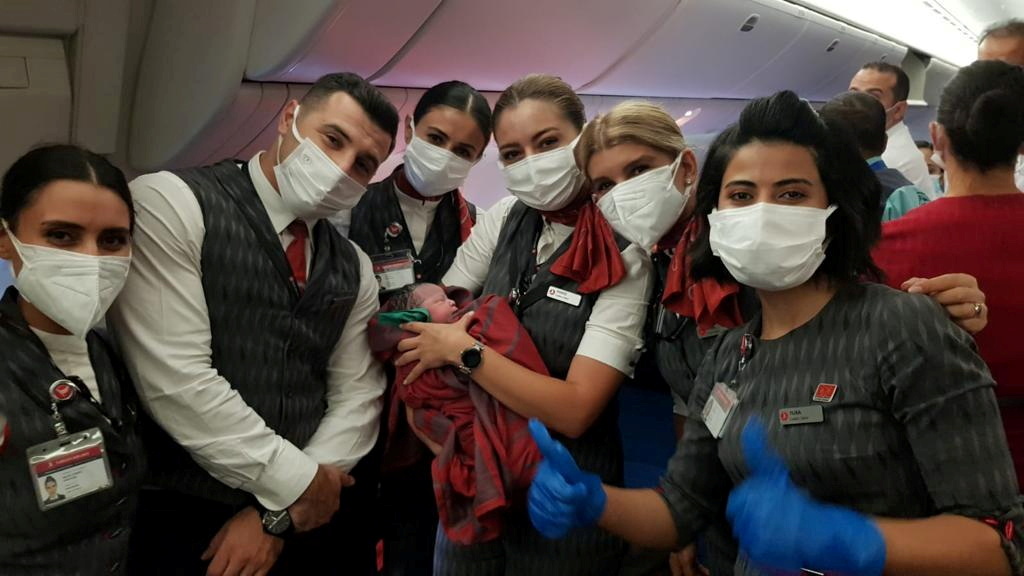 Turkey has evacuated all troops and civilians from Afghanistan aside from a small “technical group” left behind, President Tayyip Erdogan said on Friday.

Turkey has evacuated at least 1,400 people from Afghanistan, including about 1,000 Turkish citizens, Foreign Minister Mevlut Cavusoglu said earlier this week.

Qatar said on Thursday it had helped evacuate more than 40,000 people to Doha and “evacuation efforts will continue in the coming days in consultation with international partners”.

The UAE said on Thursday it had helped evacuate 36,500 people to date, including 8,500 coming to the UAE via its national carriers or airports.

India has airlifted 565 people from Afghanistan, most of them embassy personnel and citizens living there but also dozens of Afghans including Afghan Sikhs and Hindus, a government official said.

Australian Prime Minister Scott Morrison said on Friday that Australia had evacuated 4,100 people, including over 3,200 citizens and Afghans with Australian visas, over nine days, with the last planned flight leaving before the airport attack. The other evacuees were from coalition partners.

Morrison acknowledged some Australian visa holders remained in Afghanistan though he did not know exact numbers.

Australia is committed to bringing at least 3,000 more people out over coming months as part of a humanitarian programme, Home Affairs Minister Karen Andrews said.

New Zealand’s Defence Force ran three flights out of Kabul, and the last planned flight had left before the attack, a government statement said.

No NZDF personnel were in Kabul at the time of the explosions and no New Zealand evacuees were left within Kabul airport. According to preliminary numbers, at least 276 New Zealand nationals and permanent residents, their families and other visa holders were evacuated, it said. (Compiled by Reuters staff Editing by Raissa Kasolowsky, Alex Richardson, Raju Gopalakrishnan, Ana Nicolaci da Costa, Nick Macfie, Frances Kerry and Andrew Heavens)