Chinese State Councilor and Foreign Minister Wang Yi on Monday called for taking specific actions to put U.S. foreign policy towards China back on a rational and pragmatic track, given that the U.S. has clarified that it neither wants confrontation nor a Cold War with China.

Urging the U.S. to join hands to improve bilateral ties, Wang reaffirmed China’s willingness to meet the U.S. halfway if it fulfills the commitment, during a virtual meeting with UN Secretary-General Antonio Guterres that covered a wide range of topics including China-U.S. ties.

The rights and wrongs of the bilateral relationship are obvious, Wang said. Faced with suppression and slander from the U.S., China has no choice but to fight for national sovereignty, dignity and the right to development, he said. 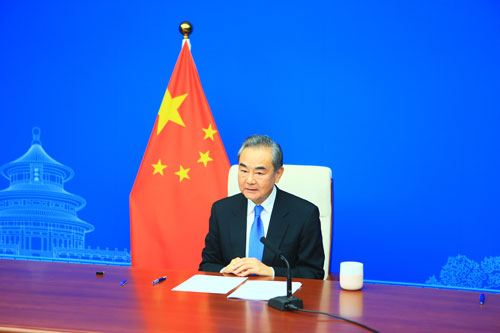 During the meeting, the foreign minister also reiterated China’s commitment to the UN Charter.

Noting that this year marks the 50th anniversary of the People’s Republic of China taking its seat at the UN, Wang said the country, a firm supporter and contributor to the UN cause, will continue to safeguard the UN Charter, the UN-centered international system and the UN’s role in international affairs.

Wang voiced China’s opposition to any move that creates divisions and a Cold War mentality. As a constructor of world peace, contributor to global development, protector of international order and provider of public goods, China will continue to contribute to the peace and development of mankind, he said.

Wang also called for giving new impetus to the 2030 Agenda for Sustainable Development amid the COVID-19 pandemic.

Thanking China for its contributions to the UN, including the anti-pandemic fight, peace and security issues, and peacekeeping, Guterres conveyed the UN’s willingness to strengthen cooperation with China in a number of fields, notably development, climate, biodiversity, peace and security, and human rights.

He also congratulated Wang on the 50th anniversary of the People’s Republic of China acceding to the UN.