Friendly relations between the peoples of Uzbekistan and Pakistan go back to the distant past. Today, these ties are developing further, taking strength from historical roots. Zahiriddin Muhammad Babur and the Baburid dynasty, Muhammad Iqbal, Mirza Ghalib, and other great thinkers and poets, immortal heritage and enlightened views are a strong spiritual bridge connecting our peoples.

Therefore, there is an increasing interest in the history, culture and art of Pakistan in Uzbekistan, in particular in the study of the urdu language. In turn, Pakistan also pays great attention to projects aimed at studying and researching the Uzbek language and literature, the history of our country.

In recent years, development of cultural-humanitarian relations, joint study of our common spiritual heritage, development of cooperation in the fields of science, education, culture and sports have been achieved.

It should also be noted that interest in the rich history and culture of Pakistan is growing in Uzbekistan as well. For example, the life and creative heritage of Mirza Ghalib, the great poet of the East, the great thinker who founded the literary language Urdu, is studied in depth.

Today there are about 10 million members of the Naqshbandi tariqah in Pakistan, as well as many admirers of Zahiriddin Muhammad Babur. All conditions have been created for them to make pilgrimages to the holy places of Bukhara, Samarkand and Andijan.

The filming of a film about our ancestor Babur has started in cooperation with the filmmakers of the two countries. Strengthening cooperation in the field of medical education to protect human health will be beneficial for our nations.

At this point, we are pleased that over the past three years, among Pakistani youth, there has been an increased interest in studying in medical universities of Uzbekistan. At the moment, more than 750 Pakistani youth are studying in this specialization in our country. The traditional friendship and multi-vector practical cooperation between Uzbekistan and Pakistan is getting stronger, and the reforms of both countries on the way to development are consistent and similar to each other.

The Cultural Exchange Program for 2021-2026 and the Memorandum of Understanding between the University of World Economy and Diplomacy and the Foreign Service Academy will undoubtedly help to raise the cooperation between our countries to a new, higher level.

As a continuation of the traditions of friendship and cooperation between the two countries, a number of activities are being carried out by the Center for Public Diplomacy of the Shanghai Cooperation Organization in Uzbekistan.

On July 12, 2021, on the eve of the official visit of the Prime Minister of Pakistan Imran Khan to Uzbekistan, an international roundtable on the topic “Uzbekistan-Pakistan: current state and prospects of regional interdependence” was organized in cooperation with the Tashkent State University of Oriental Studies.

As part of the Memorandum, an agreement was reached to hold a number of events related to the centuries-old cultural, trade, economic, and most importantly, sincere friendly relations between Uzbekistan and Pakistan on the eve of the 30th anniversary of the establishment of diplomatic relations and the Independence Day of the Republic of Pakistan. On March 2, 2021, the newspaper “Daily Times Pakistan” published an article entitled “Uzbekistan is a member of the UN Human Rights Council” by Muhammad Asif Noor, a partner of the SCO Center for Public Diplomacy in Uzbekistan, director of the Institute of Peace and Diplomatic Studies. The article focuses on the speech of the President of the Republic of Uzbekistan Shavkat Mirziyoyev at the 46th session of the UN Human Rights Council on February 22, 2021.

On November 8, 2021, the head of the cultural and humanitarian relations department of the Center F. Otbasarov’s article “Muhammad Iqbal – Teacher of the Enlightened People of the East and Islamic World” was published in “Global news Pakistan”, one of the largest newspapers of Pakistan.

Promoting the rich history and cultural heritage of Uzbekistan and Pakistan, as well as the ancient philosophy, helping to establish tolerance and mutual respect among peoples are among the goals and tasks of the Center.

The future work plan of the center includes getting acquainted with the music and architectural heritage of the SCO countries, including Pakistan, as well as conducting large-scale events with partners in the fields of education, science, sports, etc.

In conclusion, it can be said that the further expansion of cultural and humanitarian relations between our countries, the establishment of friendly relations in the field of public diplomacy, are clear expression of the sincere attitude of our peoples to each other, mutual respect and attention.

Taking this opportunity, the Center congratulates the brotherly people of Pakistan on the 75th anniversary of Independence.

Head of the Department of Cultural and Humanitarian Relations of the SCO Center for Public Diplomacy in Uzbekistan. 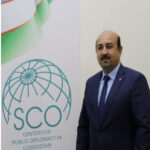